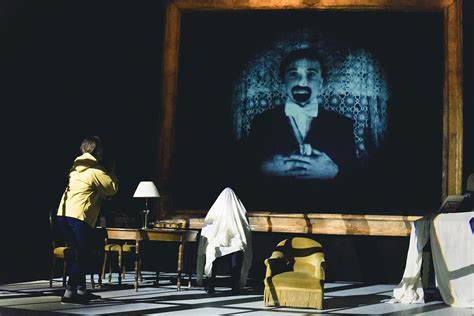 An original artistic creation for young audiences carried by two companies specialized and recognized in their artistic field.

It is an artistic encounter, that of Caroline Mutel, Sébastien d'Hérin (Les Nouveaux Caractères) and Frédéric Deslias (Le Clair Obscur) around the same desire to question the future with regard to the past, the idea of a global, universal art, which quite naturally led them to bring their research to the stage.

This "history of music to scare children" is recognized among its partners, co-producers and promoters of local actors such as the Théâtre de la Croix-Rousse, the Opéra National de Lyon and Les Nouvelles Subsistances (residence focused on creations on new platforms, dedicated to digital arts). “Theoriz Studio” (Pôle Pixel – 3D designing and programming) and ENSATT (residency focused on scenography and professional integration schemes) are also a part of the show.

Mr. Croche is the “most delicate of men”, says its creator Claude Debussy, iconoclastic and unclassifiable French composer of the beginning of the 20th century. Under a pseudonym, or his real name, his witty and humorous musical reviews shook all of musical Paris in the 1900s.

The fictional character had a brief but intense life, his remarks remained acute and had a modernity that transcended time. With an accuracy and a spirit that hit home, he gave us his "sincere and loyally felt impressions", fearlessly scratching the greats, like Wagner, while constantly missing the old ones: Bach, Rameau, Couperin... in search of a lost stylistic ideal.

M.Croche uses a freedom of tone that does not shy away from emotions: he shares with passion his love for poetry and painting, he confides in us his fears about the future of music, whether it’s "the imagination of Progress” or the education of the audience... Ah, the audience!

What would this mysterious little man say to future generations, if he took the urge to come back to tickle young ears on a dark stormy evening? And how would it materialize, what language would it be? A very secret session, an unexpected guest, voices, appearances, disputes, but also music, poems, a little bit of painting and passionate statements. In short, a not-so-classic evening!